Five Minutes with Emma – Director and Director of Photography 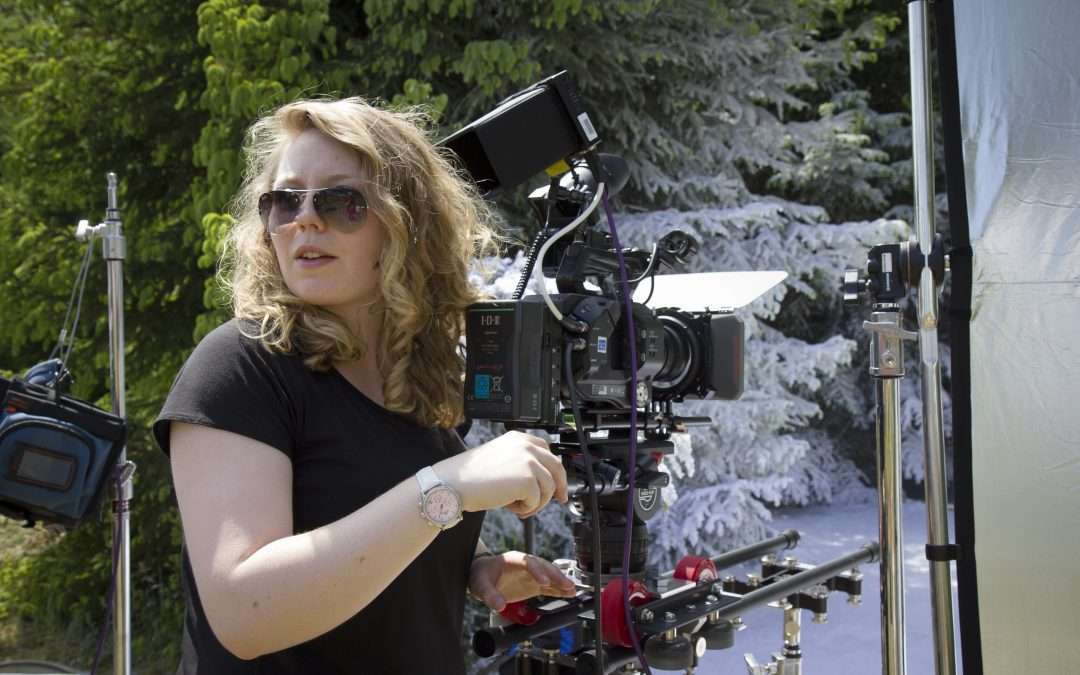 Emma Talmadge is JMS Group’s Director and Director of Photography. She’s talented in TV advertising and video marketing and also a highly experienced Cinematographer. Emma tells us all about her current projects and the skills required to be a successful director.

Have you always wanted to be a Director/Director of Photography? How did you get to where you are today?

I’ve always been artistic and was into photography at a young age, I also loved making my own little videos and editing them together. At the time I didn’t really think anything of it, I just enjoyed being creative, but by the time I finished college I knew I wanted to work in the industry. I went on to study Film & Moving Image Production at Norwich University of the Arts, where I decided I wanted to either pursue a career in editing or camera operating. So, I had never planned on becoming a Director or Director of Photography, it just developed quite naturally after initially getting a job as a junior Editor where I would also lend a hand on shoots. Fast forward seven years and I’m now directing and shooting TV commercials and video content for an array of different clients.

What does your day to day look like at JMS?

There isn’t really a typical day in my job, I could be out on a shoot, auditioning actors, putting storyboards and shot lists together, out on location recces, in the edit suite, building sets…the list goes on! My work is so varied from day to day, but that’s what I love about it.

What are crucial skills that a director/DP must have?

I think one of the most important skills is being able to think quickly under pressure. Of course, you need to be creative and able to carry your vision through whilst managing your crew and cast, but a lot of the time it’s all about problem solving and thinking fast on your feet. Every shoot is different and almost every time it throws a curveball at you, so it’s often about finding a solution whilst making sure you have the client’s video at the heart of what you are doing.

What have you been working on recently?

Recently I’ve been working on a new TV commercial for TaxAssist and a series of online videos. The TV commercial is a live-action shoot promoting the franchise side of their business and recruiting new franchisees. Alongside this, the series of online videos act as an aid to the commercial, so once a potential franchisee is on their website, the additional online videos help to explain in more detail what TaxAssist is all about. As well as this, I’ve also been working on a series of social media adverts for Naked Wines, where I shot a summer’s day picnic with close up photography of wine pouring and swirling (all shot in our studio!). Alongside this, Naked Wines also required a stop-motion advert which involved one of their wine boxes coming to life and wine bottles jumping out of it.

What has been your favourite project & why?

That’s hard to answer, I’ve loved working on different projects for different reasons. One that I’m really happy with the final outcome was TaxAssist Accountants branding TV commercial, this was different to their franchise advert I mentioned earlier, instead this was a customer facing commercial. You’d initially wonder how an accountancy business could be an interesting subject matter, but the client was open to creativity and didn’t want anything generic, which was a great brief. We came up with the concept of ‘Relaxed Tax’, so the commercial features customers going about their normal day and being super relaxed because TaxAssist has them covered. We cast and worked with some great actors that really took the brief onboard and had a lot of fun with their characters. There were four different locations, two of which are sets we built at JMS, so as you can imagine there was a lot of prep work involved in this project. Not only were we going out on locations recces, but we also had sets to build and furnish – which is an aspect of pre-production that I really enjoy. The shoot itself was great, everyone worked hard to achieve the look we were after, and I had a lot of creative freedom to light and shoot the scenes in a realistic but atmospheric way.

Another one of my favourite projects was making the TV campaign for Crisp ‘n Dry. This was great because it involved food photography…and who doesn’t love food! The client required two 30” commercials, one for roast potatoes and one for fish & chips, and each commercial would have 20” and 10” cutdowns. I’d come up with the idea of shooting each commercial in one single shot, so the camera continuously tracks backwards through food and ingredients before revealing our secret ingredient to the best roast potatoes and fish & chips is Crisp ‘n Dry. I’d set myself quite the challenge shooting in a single shot, but I wanted the commercial to stand out and the idea of filming it in one shot worked so well for this concept. There are a lot of logistics involved in terms of grip and camera equipment to achieve a shot like this, as well as some very carefully planned choreography with the models who are moving the food and ingredients in and out of shot. Without having additional shots or edit points, it meant there was no room for error, so it was a real team effort to get the perfect shot. After the shoot, there was a lot of post-production work to be done, a lot of time was spent colour grading and adding in special effects of steam on the food. With food photography it’s all about the fine details and making the food look as delicious and mouth-watering as possible, so adding in all the extra little details really heightened the commercials.

What is your favourite part of your job?

That’s also incredibly hard to answer, there are so many aspects of my job that I love. I think if I had to choose, my favourite part is being on shoots. Filming can take you anywhere and everywhere, so it’s always different. It’s really exciting being on set because it’s where all the hard work in pre-production comes together, the vision you’ve had in your head is now being realised right in front of you. It’s a very creative environment where you focus on getting the shots perfect through camera, lighting, actors, props etc. I really enjoy being creative with the lighting and camera to get the perfect look or atmosphere. Shoots are also unpredictable, as I mentioned earlier, sometimes something unexpected just happens and you’ve got to deal with it – but that’s just part of the charm!

As a director/DP you are regularly filming out on location, what has been your most interesting or challenging location shoot?

There has been a lot of challenging and interesting locations, you never know where the next shoot might take you. I’d say one of the most fascinating places was an old RAF base where we filmed in an old hanger called the Hush House, which was originally built as a jet engine testing facility. This was for a children’s Star Wars themed commercial, so we chose this location for its industrial sci-fi look. It was an incredibly unique and cinematic location to film in.

JMS also have their own studio, what type of videos tend to be filmed here?

We film an array of different types of videos and commercials in the studio. We have an infinity cove which we use a lot for green screen work, but the cove can also be painted any colour, so sometimes it’s used to film products, interviews or presenters talking to camera. The studio itself is quite large, so we aren’t limited to using the cove, we also build a lot of sets to create all sorts of different scenes for projects. The luxury of having our own studio allows you to have full control over such things as lighting or camera angles, whereas often shooting on location can limit you because the space might be small, you are affected by natural daylight (or lack of) or the weather. But working in the studio means, for example, that if you need a scene to always have consistent sunshine coming in, then you can shoot that all day long and get the perfect shot, whilst not having to worry if its cloudy or dark outside.

How do you approach a set build for the studio? What is involved?

We build a lot of different types of sets in our studio. Typically, we build domestic house rooms, such as living rooms, bedrooms, staircases with hallways etc. But sometimes a more abstract, unique or creative set is needed, it just depends on the concept. Either way, I will always start by working out the action of the scene so I can understand what is needed from the set. For example, are the actors just sitting on the sofa or are they walking into the room, does the set need to be big or small, does it need a door or window. There are lots of initial questions you ask yourself and then once you’ve blocked out the action, it’s time to start physically building the set. It’s also really important to add some interest and depth, so adding in something as simple as a window or doorway leading off to a hallway can instantly make the set more realistic and believable. We’ve got an array of different set flats which can be put in different types of configurations to create a bespoke room set. Once you’ve got the structure you can then really start to see it come together, especially once all the props and furnishings go in. It’s also really important to get the lighting right, without this the scene will never look believable, so a lot of time is spent getting this just right. What I love about building sets is that it’s really just an illusion.

What has been your favourite set build and why?

I’d have to say one of my favourite sets was a wintery snow scene built for a children’s Disney Frozen TV commercial which was to promote Rubies fancy dress costumes. The commercial was a live-action shoot that centred around two girls dressed as Elsa and Anna from the movie Frozen. We surprisingly filmed this on a hot summers day where we built a set outdoors in Elveden Forest. Of course, we couldn’t count on the weather to produce any snow, so we hired in a specialist team of snow experts. They covered our set in realistic fake snow, so we had the luxury of filming all day and not have to worry about the snow melting. They also produced realistic fake snow falling from the sky, this was to give the scene an extra wintery feel. I think this is one of my favourite sets because it really created the perfect illusion of a magical winter’s wonderland, and who’d have guessed it was actually filmed on a hot sunny day! Just in case you are wondering…yes, we did all have a snowball fight at the end!

What would be your ideal project and why?

Well, I love whisky…so I’d jump at the opportunity to shoot a commercial for a whiskey brand. Of course, I’d have to sample the whiskey as part of my creative research!

You can connect with Emma Talmadge on LinkedIn.