JMS have worked with Rubie’s to create a series of successful TV commercials to promote a wide range of children’s costumes.

The Disney Frozen dresses commercial required the audition of 120 girls  from across the UK.  We took care of all the logistics of promoting and organising these casting sessions. We shot the main body of the commercial during a single summer’s day in a pine forest, bringing in special effects technicians to dress a clearing in thick snow.  Our commercial was not only more imaginative and magical than the commercial shot by the incumbent producer, we created it for less than half the budget required for the previous campaign. 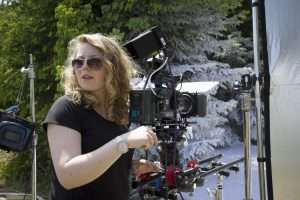 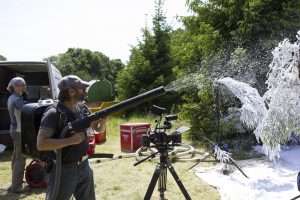 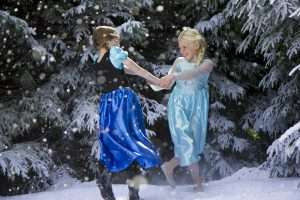 Following the success of the Disney Frozen commercial (which ran in several European languages) we pitched to create a further four pan-European commercials for the range of Disney Princess, Marvel Avengers, Spiderman, and Star Wars outfits. We began a large scale social-media campaign to cast for the commercials. We handled the entire auditions process, scouting for film locations, and the logistics of managing a large cast and crew – all whilst keeping a watchful eye on budget.

We created the four commercials and dozens of alternative cuts and foreign – language versions within a modest budget.  The client estimated the campaign to have a lifespan of more than two years, representing a potentially tremendous return on their investment.

The Director/Director of Photography Emma gives some insight into the production of the Star Wars Commercial below.

This was a really exciting project to work on as it called for a lot of creativity, and who wouldn’t turn down the opportunity to produce a kid’s TV commercial centred all around Star Wars!

There was a lot of prep work involved before the shoot, which started off by re-watching all the Star Wars films. I know it doesn’t sound like hard work, but we wanted to make sure we had a solid understanding of the films. Not only was it useful to visually reference the films, but it was also important to understand the characters and their mannerisms, this was so any direction given to the children acting in the commercial was as accurate as possible to the characters they portray.

We had a great interest in casting for the roles and auditioned tons of kids over several days, as you can imagine holding casting sessions with children is very full on and you have to maintain high energy levels, but it’s great to see the kid’s interacting and using their imaginations to act out scenes. 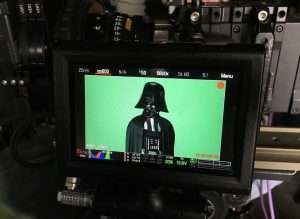 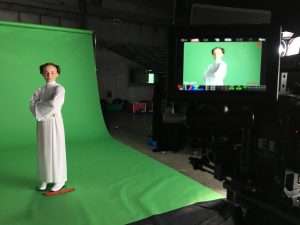 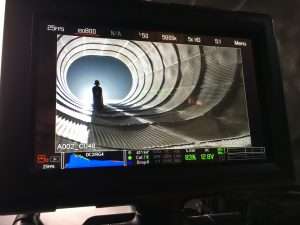 Finding the right location was really important, it had to look futuristic and sci-fi-esque, or, at least have the potential with the addition of props. Thankfully, East Anglian has quite a few old RAF bases with old hangers that are the perfect backdrop to a sci-fi themed shoot. After several location recces, we found the perfect place that offered lots of different areas we could adapt into different scenes all under one roof. This meant that we could focus on utilising our time filming and not have any large unit moves between locations that could potentially take time out of the day’s shoot. In addition to the location filming, there was also a lot of green screen work involved in this concept.  Fortunately this location also offered a large enough space to build the green screen, light and shoot on it.

The shoot itself was one day and we had quite a lot to cover, and taking into consideration the legal filming hours of children meant that myself and the crew all had to work efficiently.

You never know what a shoot is going to throw at you (that’s part of the charm of them!)  and we did have one hiccup on the day, when the equipment van broke down en-route to location. This did slow the day down but we managed to get it fixed and back up and running again and all the crew worked hard to get the shoot back on track. The children were great as well and didn’t seem to even notice they had to wait a little longer than expected – I think they were having too much fun getting into costume and practising their scenes!

This particular shoot allowed the kids to let their imaginations run wild and really get into their favourite Star Wars characters, so as you can imagine, they didn’t need much encouragement! Of course, like any shoot, a calm head is needed to make sure you are getting the best out of everyone and getting the shots you need, but there is never a dull moment. Working with kids is always fun and it’s important to us that they leave a shoot having really enjoyed themselves.

This commercial had a lot of technical aspects and effects to create the sci-fi look. Half of the day’s shoot involved green screen work, where we see the kids in costume looking directly into camera. In some of these shots we see the Jedi and Darth Vader holding up their lightsabres. The toy lightsabres didn’t produce a strong enough glow for our camera to register, so we wanted to add a little extra punch ourselves. To make this look realistic we had a small LED light coated in either a red or green gel to subtly illuminate the side of the actors when filming, this would enhance the lightsabres glow and give an extra kick of coloured light to the shot, which all added to the visual style we were after.

Once the shoot had wrapped, it was then up to our Senior Motion Graphics Designer Hugh to work his magic in post production. Hugh tells us how achieved the finished commercial we see today.

‘The ad starts and ends with a light speed jump. For this I created a 3D particle starfield and ran a camera through it. To bring on the close ups of the kids in the foreground I recreated the hologram effect that has long been associated with Star Wars. The close up and end frame shots were all filmed against green screen, so they are keyed out from their original backgrounds.  I also added in some extra lens flare, pushed the colour grading into the blues and letterboxed the video (to resemble 21:9 ratio) in order to create a sci-fi movie feel.’