WHERE NEXT FOR JMS GROUP? 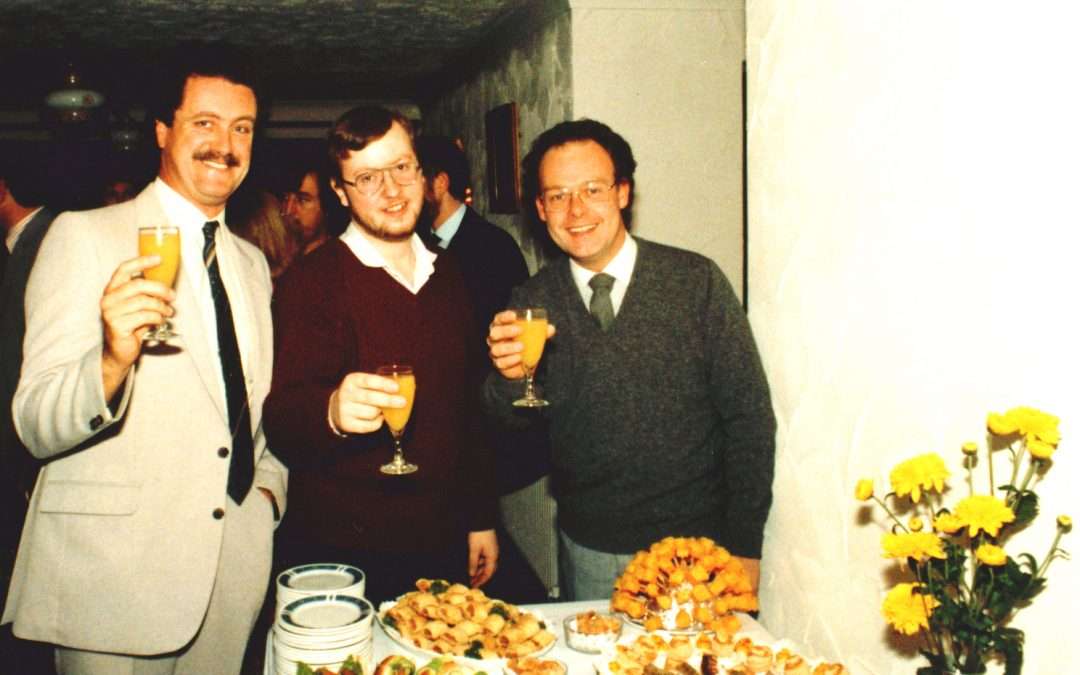 Wheat, Barley, Potatoes, Carrots, Sugar beet – the farms of Norfolk grow a huge variety of crops. But back in September 1983, at Park Farm just outside Norwich, three men were planting the seeds of something quite different…

And its spectacular growth took them all by surprise!

The idea was to set up a sound recording studio. At the time the founder, John Mountford, was a well-known face on regional and national TV and radio, so it made sense to name it ‘John Mountford Studios’ even though it had only one studio, but ambitions were high!

John recalls at the company’s launch-party someone loudly predicted the business would fold within a year. “Sure enough it was a gamble. We were a three-man start-up on the edge of a muddy field in rural Norfolk, hoping the small but growing radio industry would bring us work”.

Thankfully it did. The company (since 2000 re-named ‘The JMS Group’) evolved into the successful media business which today crafts high-grade TV and radio commercials for a local, regional and international clientele. Its studios have played host to stars like Stephen Fry, Steve Coogan, Olivia Colman, Tom Baker, Sir John Hurt, and many, many more, turning-out hundreds of TV and video productions for many of the UK’s best-known businesses.

Its achievements include the conception and birth of a TV channel, its own commercial music label, programmes for BBC and ITV Anglia, opening radio studios in London, and building its own TV production studio alongside that same muddy field! It has won awards for its videos, for its pioneering use of digital technology and, by staying ahead of each successive technical development, the Norfolk HQ now routinely delivers productions digitally across the UK, Europe and beyond.

One of JMS Group’s most powerful growth factors has been its dedication to employing emerging local talent and nurturing the abilities and enthusiasms of Youth Trainees, Interns and Apprentices. As a result JMS boasts not only a hugely skilled team, but alumni in prominent positions throughout the UK radio and TV industries.

By regularly rejuvenating its skills-base, JMS continues to provide a slew of broadcast specialisms in-house, from scriptwriting and production planning, to motion graphics (CGI), sound design, video editing, casting, shooting and extensive post-production. And for everything else there’s a large team of experienced freelancers.

Now after 36 years, John (Chairman, 70) is retiring. “The present team” he says “led by its enormously capable Managing Director Francesca de Lacey is youthful, highly skilled, brim full of enthusiasm, and producing a quality and variety of work we could never have foreseen back in 1983. It’s the ideal moment for me to step aside”.

John marvels at the success of JMS Group. “OK, our early hopes for radio production were realised, and for a while we were the largest independent radio commercials producer in the country. But going on to build our own TV studio? Producing over 200 TV ads a year? Creating huge banner animations for electronic billboards in Piccadilly Circus? World famous stars recording soundtracks here for feature films? All beyond my wildest dreams, yet now almost a daily occurrence!”

MD Francesca de Lacey paid tribute to John’s foresight and inspiration. “When I joined the company from an ad agency in London 15 years ago, I was astonished in my first week to find myself alongside the entire team on a chartered plane heading to Paris for lunch at the Eiffel Tower! It was part of JMS’ 21st birthday celebrations and I was blown away by the atmosphere in this amazing business John founded. JMS has gone from strength to strength under John’s leadership, and though he’s a tough act to follow, I shall ensure the company continues to grow, innovate, and create great TV”.

As if to demonstrate that determination, the firm has recently recruited team members in the marketing, creative and production management departments, and is looking for further keen apprentices.

But where will the future take JMS? “Right now the run-away growth area for smaller businesses and first-time advertisers” says Francesca “is ‘fully addressable’ TV advertising via our partner AdSmart from Sky  – another remarkable digital advance. Plus tailored on-line videos, podcasts and vodcasts.” We really are experts in our (muddy) field!